Melissa Etheridge on her McCallum theatre show: "’I'm trying to make people look up from the crazy time we’re living in and sing the songs you know and love.”
PHOTOGRAPH COURTESY MELISSA ETHERIDGE

Health, wellness, and cannabis all vie for attention on the latest album for Grammy- and Oscar-winner Melissa Etheridge, aptly titled The Medicine Show, which was released in April. There’s also other timely subjects that touch upon such things as the opioid crisis, the bravery exhibited by the survivors of the Parkland school shootings, and even national anxiety.

That’s deep. But it’s all so real.

Like Etheridge in conversation. The acclaimed singer, who takes the stage at McCallum Theatre Nov. 14 with her concert, also titled The Medicine Show, says she’s inspired to perform in the desert and looks forward to giving the valley a timely show to remember.

“When I started writing the album it was right around the election of 2016 and I was questioning everything and feeling vulnerable,” Etheridge says. “I started writing from my own personal thoughts of what I saw happening around me. That’s where the songs started coming from.”

• READ NEXT: 49 Things to Do in November in the Desert.

When she began looking at the endeavor as a whole and took it on the road, she decided to dub it The Medicine Show for a very good reason.

“I realized it is a medicine show because back in the 1920s, ’30s, and ’40s, it’s where you found music and rock ’n’ roll and country music – it was in medicine shows,” Etheridge says. “The person would be coming through town and be selling snake oil. A remedy. You’d get some good music and the whole town would turn out for it. So I said, ‘Yeah, that’s what we’re doing.’ I’m trying to make people look up from the crazy time we’re living in and sing the songs you know and love.”

That’s easy to do with Etheridge. Her critically acclaimed eponymous debut album in 1988 went certified double platinum and songs like “Bring Me Some Water” and “Ain't It Heavy” enchanted Grammy voters. Her fourth album, Yes I Am, went nuclear, thanks to the mega hits, “I'm the Only One” and “Come to My Window.”

Life and career seemed sublime – until about 15 years ago when Etheridge was diagnosed with breast cancer. It totally shifted her focus.

“It really brought into focus the whole meaning of life for me and I knew what it was not,” she says. “It was not a hit song on the radio and being No. 1 on the charts. That was not how I was going to be quantifying my life from now on. It was going to be the quality of my experience. ‘Is it feeding me? Is this is this growing in my spirit?’ So, at that point, it was spirit that got me through cancer. It was understanding that, ‘Oh, this is my physical body. I can recover from this. I can work to make my body stronger. I can work to do the things that benefit my body, and I did.’”

Etheridge has been cancer-free for 15 years. And you get the sense that some of the topics she delves into on the latest album and in real-life are filled with deeper intentions. 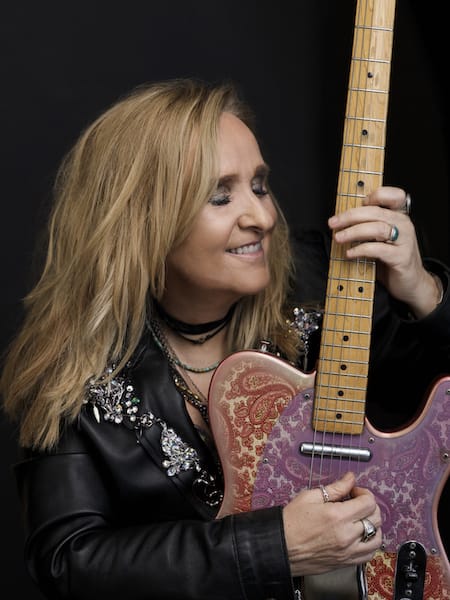 One of them is cannabis, a subject that has captured the attention of Californians in recent years.

“A big part of my life right now revolves around cannabis as a business, helping with cannabis legalization and regulation, and understanding cannabis as medicine,” Etheridge says. “During the time of my breast cancer, I was also arrested for carrying cannabis in North Dakota, crossing the border. I realized that this is a social problem in that we have so many people locked up in jail for this thing we are legalizing and white people are starting to make a lot of money on. So, all of these issues wrapped up into the actual song “The Medicine Show.”

“Before this, the only thing you can compare cannabis to was the prohibition of alcohol,” she adds. “The gangsters all of sudden became the businessman. That’s sort of where we are right now. Especially in California.”

Originally from Leavenworth, Kansas, Etheridge’s passion for music lead her to sing in local bars there. “The performer that I see now is the one who played every Friday and Saturday night at the Eagles Club,” she admits.

• READ NEXT: What's This About a Web Series Shot in Palm Springs?

Well, perhaps with a larger audience these days. She says she’s acutely aware of the energy coming from a mass audience and what that energy has the capacity to do for a performer.

“If you’re an entertainer who can take that energy and put it inside, and transform it through your filter, whatever it is – your voice, the guitar – and you can give it back to people, that’s the groove you want to be in,” she says. “That’s when everyone is moving to the rhythm of the music. I imagine it’s what ancient cultures used to do in their spiritual ceremonies. This is what drumming and music has always done. It lifts peoples’ spirits up. That’s when it goes beyond you and the audience. The person onstage becomes more a shaman, raising people up.”

It’s interesting that Etheridge brings up the word shaman, which is typically one used by those who lean more spiritual.

“Well, I see my journey since going through cancer as a spiritual one and a practice every day,” she admits. “It consists of whatever it takes that day to get my thought and my focus on and my attention on whatever flow I want to be in. If I find myself tripped up, looking too far in the future, I have to come back right into the moment. It’s just a practice. I don’t do it perfect every day, but I realized after 15 years [surviving cancer] that, ‘Oh, I can practice my way into happiness.’”