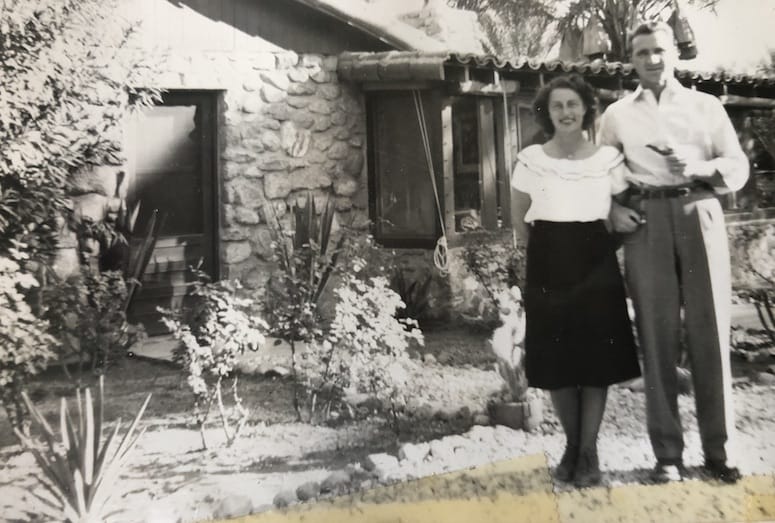 Editor's Note: Writer Kay Kudukis chronicles how Stephen Follansbee raised the question to Rancho Mirage officials of his family’s claim regarding the 1932 Rancho Chiquito house following the publication of a story she wrote for the 2017 issue of R/M Magazine.

In 2016, I was assigned to write an article about a little house that was the oldest known home in Rancho Mirage (1932), built and owned by the Clancy family. It was the first structure to be named on the Rancho Mirage Register of Historic Places.

The city, in conjunction with new landowner and developer, John Wessman, had carefully and lovingly moved the structure, river rock by river rock, from its location at 72116 Follansbee St. to Rancho Mirage Park (aka Whitewater Park). My editor’s request was “Please include information on its history, its original location, its move to its current location, and its significance to the City of Rancho Mirage”.

Twenty-eight years after Rancho Mirage was incorporated in 1974, a midcentury modern gem met its demise. John A. Turturro from the Ventura County Star in 2007 tells the story of the unprotected Richard Neutra house well: “The Maslon house was photographed by the great architectural photographer Julius Shulman (note: known for his comprehensive documentation of midcentury modern architecture and urban development) and was widely published and studied. Mr. and Mrs. Richard J. Rotenberg, the new owners, assured Sotheby's Realty, the Maslon family, and Neutra's son, Dion, that they appreciated and would restore the home. Thirty days later, April 4, 2002, the modern masterpiece at 70-900 Fairway Drive, Rancho Mirage, was bulldozed.”

So when a little house at 72116 Follansbee came to the city's attention, they acted swiftly and saved it. 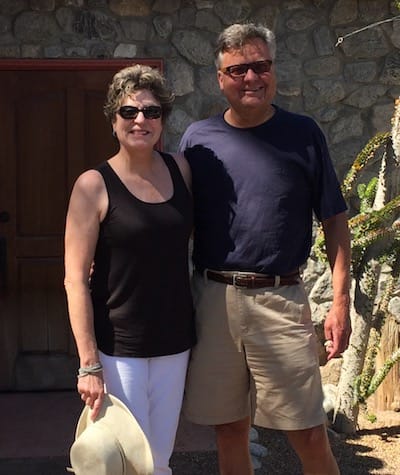 The story I turned in went with the official narrative that the house was built by the Clancy family. I did, however, run into some contrary information. Here is something that I cut from the story: There is no record of who built or owned Ranchito Chiquito (original name: Casa Chiquita), but more than likely they were friends of L.M. and Helen Clancy who, according to the official record, were the first to build a ‘rancho’ in what came to be called “Little Santa Monica”. I remember being conflicted by a few different accounts I had read, but decided to go with the Historic Preservation Committee’s narrative that it was built by the Clancys.

Soon after it published, I received a direct message on Facebook from a man named Stephen Follansbee. He told me that he thought the house I had written about was actually his grandfather’s home, Merrill Middleton Follansbee, Sr. The family was big on photographs, and documented their little home very well. He has over 20 snaps of the home he believes is the same one that sits in Rancho Mirage Park attributed to the Clancys. In addition, he has a watercolor, personal family memories, and then there was that name, Follansbee, where Casa Chiquita (renamed as Ranchito Chiquito) previously resided.

I forwarded the photos to my editor, who was equally as intrigued. We stared at the photo of the house on the register, then the photos from Follansbee. We texted and called each other with what we felt were photographic clues, “it is!” “it isn’t!” we were consumed with the little mystery. We felt like we had become part of it.

• READ NEXT: What's in A Street Name in Rancho Mirage? Plenty. 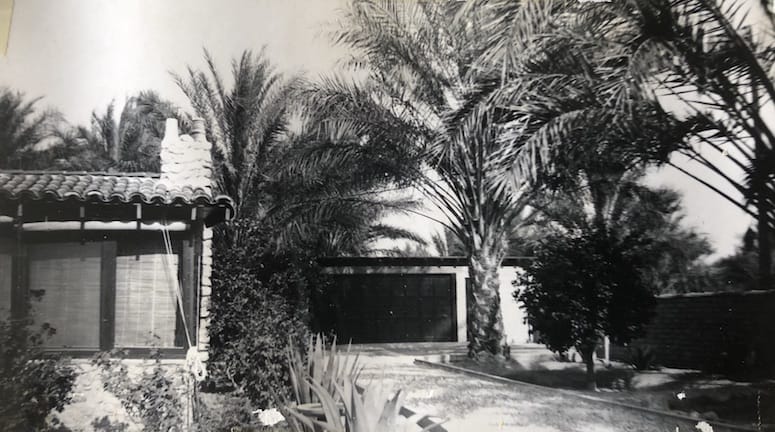 PHOTOGRAPH COURTESY STEPHEN FOLLANSBEE
A shot of the house, date unknown, from the scrapbook of Merrill Middleton Follansbee, the father of Stephen Follansbee.

Follansbee carried the torch for several years before he got any traction. In the summer of 2019, he let me know there were updates. We finally met after all these years, and he took me back to the beginning of his journey.

“[My friend] sent me a link [to the article] and I looked at the house. I said, "Well, this is the house that I had taken my dad to," Follansbee recounts. “My dad (Merrill Middleton Follansbee) and my mom (Muriel Ruth nee Stoner) were out here before he died. I knew about Follansbee Road, so I took him there. It was a dirt road at that point. It had not even been paved, and we looked at the house. We didn't walk up into the property. He said, "Yeah, that's the house." And then he sort of related some history that he had.”

“After he and my mom were married in '47, they went on a road trip. They came out to Rancho Mirage, and my grandfather and grandmother, his second wife (Lenore nee Smith), entertained them on the front porch (not original to the home) with lemonade and all that, but mom said, "They didn't invite us in, so off we went." My mom was kind of offended that they weren't invited into the house, but she remembers that. So she remembers seeing it in '47, '48, early, before I was born. I had no idea what had transpired in the, basically, 20 years until I saw your article. I’ve sort of pursued it since then.”

Ben Torres, associate planner at the City of Rancho Mirage, explained the city’s process for looking into a property’s roots in an email, “For a building to be designated a Historic Resource it needs to go obtain a recommendation from the Historic Preservation Commission and approval from the City Council. The Historic Preservation Commission will start their review with material submitted by the property owner, which can include plans, magazine articles, photographs, etc. 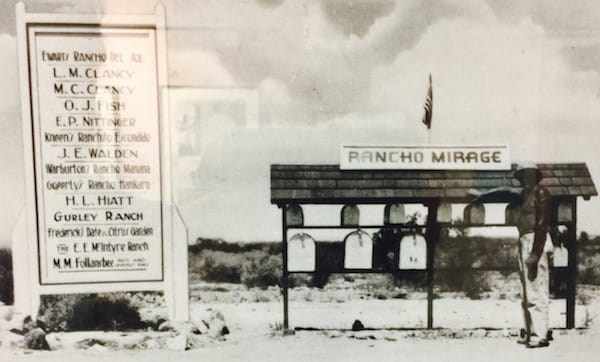 PHOTOGRAPH COURTESY CITY OF RANCHO MIRAGE
This 1937 photo shows a sign next to a row of mailboxes indicating the home owners. At the bottom of the sign is the name M.M. Follansbee.

The commission may then want to conduct a property tour of the subject building. Based on the property tour results and information provided, a recommendation of approval may be made by the commission. At a noticed public hearing, the City Council will then review the materials provided and make a final determination on the request.” The commission consists of five members.

Follansbee drove out to Riverside and mined the county's files and found the original land deed. “It turns out," he says, "that for the princely sum of $10, my grandfather purchased 10 acres from E. MacIntire and his wife, which means it was a dollar an acre. In the grant deed, there's no listing of any structures or anything like that. It just said that the grant deed did allow an easement for a road and for some pipes, should the county want to do that.”

There were more memories to be mined by Follansbee, “My Aunt Marcia (Follansbee Heeger) was 93 when I asked her through my cousin [about her memories of the home]. In 1932, my aunt would have been about nine. She remembered coming [to the house] as a young girl, and staying there. She remembered the Clancys as being somewhat elderly and asthmatic, as if they had some lung problems. The people around my grandfather's property had more glamorous homes, and the kids played at those. [My grandparent’s] home was always very simple, a one-room house with a bathroom that had some electricity, and then a kitchen area. But she remembers a one-room house." 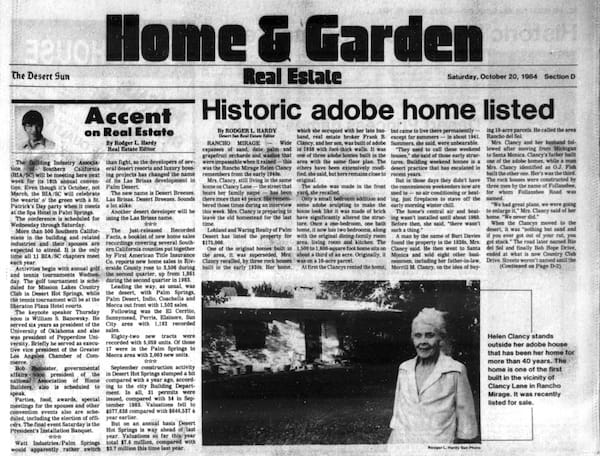 At the beginning of his investigation, Follansbee went to the City of Rancho Mirage and saw a photo hanging in the back. It is labeled “first post office” which is just a series of mailboxes and a list of mailbox holders. “It’s dated 1937, and there's my grandfather's name at the bottom. It says, I think - “Pineapple and Date Ranch”, or something like that. And it lists all of the other landowners.”

In 2017, one of Follansbee’s friends saw Melissa Riche (co-author of Mod Mirage, with husband Jim) give a lecture, and approached Riche about Follansbee’s story. Follansbee contacted her and she dug up some very interesting information. In an email to the city, she wrote, “A while back, I found this article on the Clancy house, from the Desert Sun in 1984, when the Clancy family put the house on the market. As you’ll see, [the Clancy home] was an adobe home, and not a rock home. In the article, Mrs. Clancy talks about the earlier rock houses built by the Follansbees."

On Jan. 8, 2020, Follansbee received notice from the city that his hard work had paid off. He couldn’t have been happier. “The 4 Commissioners in attendance seemed to be impressed by the 1984 interview with Ms. Clancy that was provided. They also were impressed by the documentation I located regarding the sale of the 10 acres to my grandfather, registered in December 1932,” Follansbee said in an email.

The historic home known as Casa Chiquita will have two new plaques created with new language indicating his family’s ownership ties to the property dating back to the 1930s, while the name of the house, Ranchito Chiquito, would not be modified, according to Torres.