Bring your appetite to Sherman's Deli and Bakery, serving up generous portions of all the classics.
PHOTOGRAPHY BY BRANDON HARMAN

A New York–style delicatessen with locations in Palm Springs and Palm Desert, Sherman’s Deli and Bakery serves up generous portions of all the classics: lox platters, chopped liver, a prodigious beef-and-latke sandwich with homemade potato latkes in place of bread, and old-fashioned cheese blintzes.

Named Restaurant of the Year and voted No. 1 Sandwich in the Desert by the California State Senate and Assembly, the Supervisors of Riverside County, and the Palm Springs Chamber of Commerce and featured in 2017 on Diners, Drive-Ins, and Dives, the family-owned hot spot got its start when Wisconsin native Sherman Harris moved to Palm Springs in the 1950s and began working as a line cook after serving in the Army in ﬁve major battles. By 1980, Harris had ﬁve delis of his own that had become regular hangouts for more than a few celebrities, including Frank Sinatra, Red Skelton, Zsa Zsa Gabor, and Rita Hayworth. 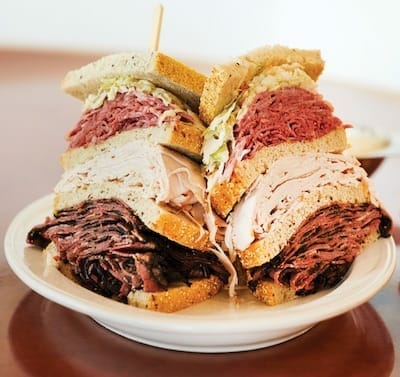 Now run by his son and daughter, Sam Harris and Janet Harris, Sherman’s two Cochella Valley outposts celebrate what the founder started: a strong sense of community and a focus on simply delicious food.

Naturally, you can’t visit this deli and bakery without trying the homemade dessert, and there are cases full. If you’re in the market for a statement layer cake to fête a special occasion, Sherman’s has you covered. For those looking to eat and run, we suggest a goody bag of babkas and sticky buns to go.